“The Curve” Apartments are Just Around the Corner! 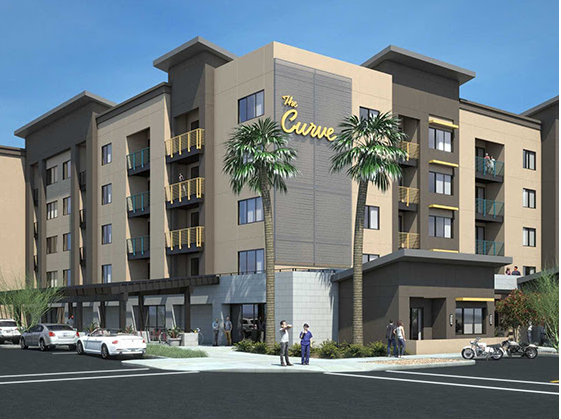 “The Curve at Melrose,” so named for the unusual bend in Seventh Avenue, is expected to bring hundreds of new residents to an area that’s seen some home prices double in just a few years.

Atop what was four acres of dirt for decades, apartment developer P.B. Bell is on schedule to open it’s 204 market-rate apartments in February. Studio, one, and two-bedroom models are available for pre-leasing. They range from $1200-$1550 on the project’s website.

“(Melrose) is a very eclectic, diverse, and hip neighborhood,” said Mike Trueman, V.P. of Development for Scottsdale-based P.B. Bell. “I’ve kinda fallen in love with it over the years.” Trueman has managed the project since Bell acquired the land in 2013. He’s been its public face at neighborhood meetings since plans were first filed with the city.

“Melrose gives you that urban feel, but it still has a very tight neigborhood,” he said in an interview with This Melrose Life. “If you go half a mile to Central Avenue you don’t have that.” Trueman worked with Melrose activists to design a project that complements the visual character of the area.

“We are very sensitive to neighborhoods,” He elaborated. “We design and build these as if we’re going to own them for a long time.” At five stories, the Curve’s slanted rooves, pastel highlights, and staggered façades nod to mid-century modern motifs. “We don’t mind standing out,” Trueman said. “But not like a sore thumb.”

Trueman said his company profits in the long run by investing in unique, memorable products. They plan to own and manage “The Curve” for several years.

Many merchants along the Melrose Mile welcome the new residents, though also see construction as a signal to preserve the neighborhood’s identity.

“I am very excited,” said Stacy Louis, owner of the dance club Stacy’s on Melrose immediately next door. “The Curve is going to bring me a lot of business.” The Curve is one of two structures being built next to Stacy’s. “I don’t want to see four more apartment complexes here,” Louis added. “I think it’s important to keep it neighborly.”

Bill Sandweg, owner of Copper Star Coffee two blocks away expressed a similar view. “I think (The Curve) is going to be great for the neighborhood,” he said. “But, I also share the fear of those who say ‘they’re building too many apartments.” Sandweg was speaking generally about dozens of multifamily projects across central Phoenix.

P.B. Bell, who recently opened the 244-bed “Escape” at 16th Street and Highland Ave., received national attention when they tried to tear down the now vacant Melrose Liquors building in front of “The Curve.” 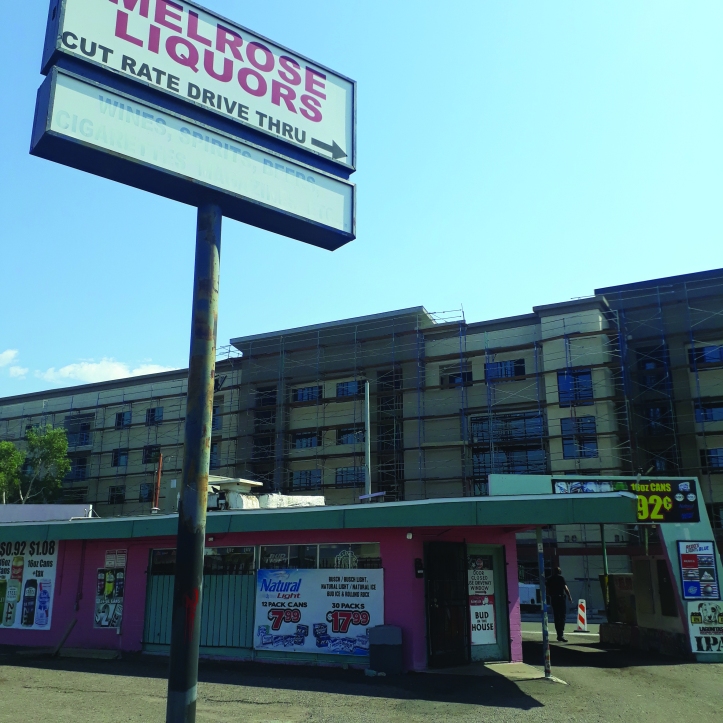 Bell originally bought the irregularly shaped, pink and cyan parallelogram with plans to incorporate it into the apartment project, but decided to demolish it after design negotiations with the City of Phoenix. “Personally, I did not agree with that decision,” Trueman said. “I was overruled, so we applied for a demo permit and then, well, you know what happened.”

Over 1300 Melrose activists signed petitions to save the building.

“I got a call from a friend in Florida who read about it in U.S.A. Today,” Trueman said with a laugh. “He asked, ‘are you trying to tear down some liquor store?” After that, P.B. Bell entered into contract with restauranteur Rebecca Golden to re-adapt the liquor store into a bistro eatery.

Golden, who founded 32 Shea in North Phoenix, is marketing the upcoming cafe as “The Googie on Melrose,” a reference to the architectural style found in several buildings along 7th Ave. “We’re happy about it to be honest,” Trueman said. “(A public place) was our original plan.”

“The Curve” pencils out around $35 million, according to Trueman, about $1 million of which the comapany invested itself.

Bell acquired the liquor building and the several yards of paved lot around it when they purchased the dirt for “The Curve.”

“We wanted whatever’s going to go there to be an ammenity to both our project and the neighborhood,” he said.

Bell’s original plan featured three tiers of apartments that branched off a common spine, what Truman described as resembling an “E.”

“Personally, on this specific site, I liked (that) one,’ he said. “It allowed more exposure to the sunshine.”

Trueman said he could not remember exactly what City planners objected to, but Bell had to sacrifice some parking and a planned dog park to move forward with the current “donut” style footprint.

“I don’t think a dog park should be at your front door,” Trueman said. “This is a pretty predominant corner.”

After the public’s reaction to the liquor building, Bell went back to interviewing restaurant tenants.

“Rebecca’s very sharp,” he said. “She’s got a different viewpoint on things, which is refreshing.”

Trueman said it was a lack of new construction in the Melrose area that attracted Bell.

“We’re not just there out of the kindness of our hearts,” he said candidly. “We’re going to offer something that’s not there.”

Coming soon: More on P.B. Bell’s “The Curve,” including audio of an interview with Truman.