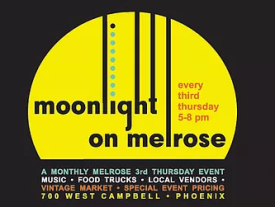 Everyone and their mother, neighbor, partner, and dog are encouraged to keep joining the “not-so-street-fair” that happens every third Thursday around 6:30 p.m. at Campbell Place (north of the Grand Canal).

“We want to draw people to our neighborhood to linger longer and explore,” said Teresa Martin, co-owner of Kharma Life Center. “We want to offer the local residents an opportunity to shop in their own neighborhood, after hours.”

At least once a month, the retail plaza at 700 W. Campbell – outside Martin’s studio – brings food trucks, fresh food growers, artisans, and live performers to Melrose. It’s the kind of event where one can find homemade jams and soap next door to essential oils, in between hand-made whatch-ya-ma-jigs and frozen yougurt.

Previous Moonlights have included drum circles, vocalists, and even a cat-psychic!

“We come to see neighbors, support local businesses, and to eat dinner,” said Matthew Conners, who lives down Campbell Ave. “It’s guaranteed that on Third Thursday I’m not cooking!”

Third Thursday is a micro version of Downtown’s First Fridays, which started as a collaboration between merchants on Roosevelt Street. Frockify, Big Wow Home and Garden, and Twigs and Twine will each be open after normal business hours January 18th according to http://www.melrose3rdthursday.com.

“We look at this as the hub from which lots more can and will sprout,” Martin said.

For now, Moonlight hasn’t spilled past the parking lot of the Campbell Place retail plaza, but Martin, who was appointed last year to the Governing Board of the Seventh Avenue Merchants’ Association said January will welcome new food truck vendors.

Even if merchants don’t want to stay open late, she invites them to contact S.A.M.A. to discuss how they can participate. Their quarterly general meeting will be held Jan. 25.