Melrose Pride: Over the Rainbow?

UPDATE: The City Council will consider issuing a public request for proposals to install a rainbow colored crosswalk at 7th and Glenrosa Avenues in The Melrose District. The regular meeting will be held 2/24 @ 2:30 P.M. In the Phoenix City Council Chambers 200 W. Jefferson Street. (Click to read City’s Meeting Notice)

Like “gay friendly” areas in many of the world’s largest cities, The Melrose District is much more than a destination for dancing and drinking after dark. The mile has served for decades as a hub for antiques, giftables, greasy-spoon eateries, bars, and independent auto shops. But as residential and commercial property values start to rise west of Central Avenue, nothing about Melrose’s reputation, or its tenants, is set in stone.

“Melrose is organic,” said Carlos Castenada, who serves on the Board of Directors for Phoenix Pride, the organization that hosts the annual Pride Festival and Parade in April. “(Melrose) is filled with people who are themselves.”

Castenada, 35, was originally born in Texas but grew up in Phoenix. Speaking on his own behalf, he said Melrose is where he feels the most comfortable celebrating his same-sex relationship.

“I can walk in Melrose holding my husband’s hand because I see the rainbow flags around me,” he said. “I wouldn’t go to north Scottsdale or Mesa and feel the same way.”

Phoenix is now the fifth largest city in the United States, but still lags behind New York, Los Angeles, Chicago, Philadelphia, Miami, and even Tucson for installing a rainbow crosswalk in its “gayborhood,” what Pride hopes to change this year.

“Every other major city has one,” said Castenada. “Phoenix has arrived at a destination where it’s inclusive, where (gays) are welcome as a part of the tapestry of the city, and we’re putting a visual symbol on that.” 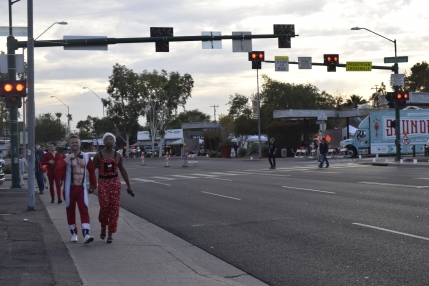 “We wanted to have it done by the Pride Festival,” Phoenix Pride President Mark Leeper told T.M.L. in March. “We have the support of the Mayor’s Office and (District 4) Councilwoman Laura Pastor.”

Pride also met with Melrose leaders, including the Seventh Avenue Merchants’ Association, who embraced the project.

“We have sent a letter of support,” said S.A.M.A. President Mike Poulton during their January general meeting. “I mean, this is the gayborhood.”

Richie Strauss is co-owner of Wag n’ Wash Natural Pet Food & Bakery on 7th Avenue. He recalled hosting local celebrity drag queen Barbara Seville in front of their store shortly after opening ten years ago. “I don’t remember who approached her, but we were like, yeah this is the gay curve,” he said. “Of course we’re going to have her.”

Strauss said there was mixed reaction to evening public performance. “We assumed it would be expected, but some people were not happy.”

Now Strauss is excited about new developments like The Curve Luxury Apartments and The Googie @ Melrose – both across the street – which will bring new Melrose patrons.

“We want people to come here and spend money,” he said. “These (shops) are here for them, (Melrose) is for everyone.”

Angie Williams and her girlfriend discovered Melrose by accident when they stayed in an Air BnB last year. “We were canvassing the neighborhood to see what the downtown and central area was like,” she said. “There were rainbow flags everywhere and it was inviting and welcoming to see that, especially moving from a blue state to a red one.”

Williams, 35, relocated from Chicago to enroll in medical school in downtown Phoenix. “What I’ve found here is that the gay community is really spread out,” she said. “Definitely keeping the flags is a good start, but if (Melrose) brings that identity alive it will bring more people.”

There are only about six buildings that don rainbow flags on 7th Avenue, and at least two bars do not cater to the L.G.B.T. crowd. Though the Melrose arch that spans the boulevard is the only of it’s kind in the state, there is no visual that specifically celebrates the area’s “gay” identity, as in other southwestern cities like Los Angeles and Dallas.

Chase Parker, 31, is a procurement professional who works downtown. He prefers male partners and moved from Gilbert to Melrose because he considers it a “safe place” to seem mainstream. However, he wants “gay culture” to grow beyond the bars. “Historically, our safe space was a bar environment,” he explained. “It’s a give-and-take because we are their patrons and (gay bars) donate to gay (social) causes.”

He compared dining in Melrose to an experience he had in a restaurant in Gilbert. “There were a lot of sideways stares,” he said. “My boyfriend was uncomfortable from the moment we walked in the door.” Parker said his family encouraged him to move out of the suburbs. “My brother said, ‘I love you, but you are not Gilbert.”

There are only a handful of sit-down dinner restaurants currently on the Melrose Mile, such as the family-owned Thai Longan at Campbell Ave. and T.J. Culp’s fusion bistro Restaurant Progress, though more are expected with the opening of 200 market-rate apartments in February, and a 79-room boutique hotel due in 2019.

Restauranteur Rebecca Golden is currently remodeling the former Melrose Liquor building (now The Googie) into a “Palm Springs themed” breakfast-through-dessert-and-cocktails spot. “Why isn’t the (Gay Pride) parade held in Melrose” she asked Castenada at S.A.M.A.’s meeting. He explained it makes more sense for the parade to lead up 3rd Avenue directly into Indian Steele park.

In addition to public events, Phoenix Pride raises funding for L.G.B.T. support services and scholarships. Their office is downtown, near the light rail, other social services, and where they want to install a second rainbow crosswalk.

“Whether you’re straight or gay, Melrose is authentic,” Castenada said. “It’s not particular to L.G.B.T.Q., it’s particular to humans.”

He said Pride’s proposed crosswalk is less about reminding people who already know what’s here and more about broadcasting to those who aren’t familiar. “It could serve as a beacon if you don’t feel safe,” he said. “It’s not for us to force labels onto people, but a place where (gays) can see themselves, if they chose.”

Stacy Louis, owner of Stacy’s @ Melrose night club thinks the crosswalk should be in front of his bar at Turney Ave., instead of the proposed sight at Glenrosa.  “I’ve seen four people killed crossing 7th Ave.” he said. “The City needs to do something.”

Of about 40 comments written on This Melrose Life’s “thought wall” at Street Fair, about half referred to the area’s identity within the L.G.B.T. community. Click here to read more comments, or click here to take a survey about Melrose.

near the proposed crosswalk

The Bunkhouse Bar on 7th Ave. 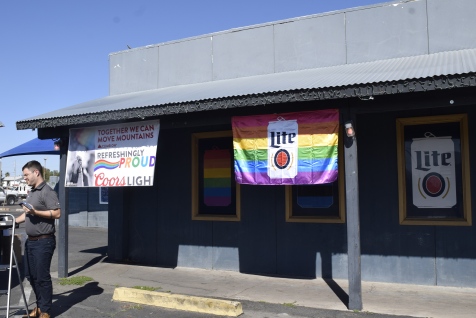